"Your money order should be $ 576.20": Who should pay for the reunification of the children with their parents?

Different immigration lawyers found that after the implementation of the policy of 'zero tolerance' with immigrants, many shelters were asking parents to pay the costs for reunification with their children. A judge ordered the government to assume them, but in practice this process is not clear.

With text messages like this one, mothers, fathers and relatives of separated children in the border knew that they were going to see the minors again, but only after they paid for the air tickets of their children.

Who should pay for this reunion? Under the policy of 'zero tolerance' with undocumented immigrants who arrived illegally in the United States, several immigration lawyers found that the children's shelters asked immigrants for that money.

They requested a money order to the adult, they bought the child's ticket, sometimes even the passenger's ticket, and they sent a text message with the time of arrival at the airport.

But in recent days the responsibilities for these payments are changing, or at least they should. 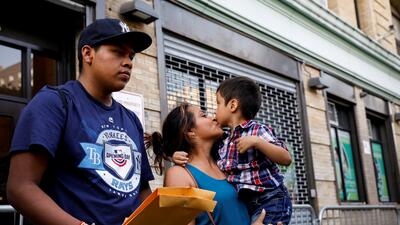 Rosayra Pablo Cruz, a Guatemalan mother who had been separated from her two children, leaves a detention center in New York after being reunited with her family. Brendan McDermid / Reuters

That was the judge's response to a complaint filed by the American Civil Liberties Union (ACLU), which provided evidence that officials were asking migrants to pay for reunification services with their children. The ACLU said in a court document that they asked a father for $ 1,900 to meet with his little boy.

But for the lawyer representing the Trump government, Sarah Fabian that is a "giant request" for the Department of Health and Human Services (HHS), which is already responsible for the custody of separated children and supervises juvenile centers that welcome them. According to Fabian, the agency has limited resources.

The policy of 'zero tolerance' is costing HHS at least 40 million dollars in the last two months, according to reports on the Politico website . This includes shelter for these children - estimated at $ 1.5 million per day - and the process of reuniting families, in many cases hundreds of miles away. According to the website, HHS has had to devise strategies to face the growing demand for resources and even ask its officials to prepare to use other accounts of the agency that were not intended for these purposes.

"The government will make it happen," said the judge, who had already seen how the Trump administration violated the first deadline that he himself set for the reunification of a hundred parents with their children under 5 years.

Sabraw’s order, however, did not completely reassure immigration lawyers, who are wondering what guarantees there are for that payment to be met.

In practice
The process for the reunification of parents and children does not seem clear to the social workers who are in the shelters, say lawyers and affected. Univision Noticias requested information from HHS about the family reunification process and about who should pay for it, but until the closing of this note, it did not receive a response.

Sindy Sánchez is the mother of two children who are in the custody of HHS. She was released a couple of weeks ago and lives in Houston, Texas, with her sister, but her children continue hundreds of miles away, in Maryland. At first the social worker explained to the sister, who is the one who waits for the custody of the children that she herself had to pay for both her plane ticket and the children's ticket.

"Now they told me they have to find out if I have to pay for it or if it's the government's turn," he says on the phone. She is waiting for that answer that the social worker of her case will give her, since that depends on her being able to see her children again in the coming weeks, as promised.

"All these changes happen so fast," Astrid Lockwood , an immigration attorney, told Univision News. "We are learning as it happens, but right now there is no formal system at all."

Attorney Eileen Blessinger worked Monday on the reunification of nine children with their parents and, effectively, the government paid for those children's plane tickets to Brownsville, Texas, where they embraced again with their family. 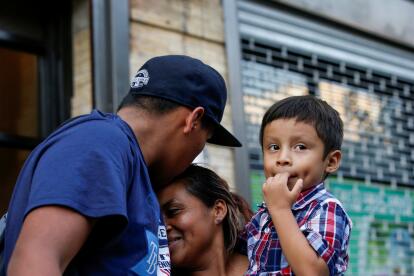 "They pay only for those tickets, not for the cost of the trip to the final destination," Blessinger told Univision Noticias. From the border, most parents travel later with their children to other parts of the country where they have relatives and will continue with their immigration processes in freedom.

Non-profit organizations at the border are paying for some of those tickets. Others, such as Immigration Families Together , were created as a result of the crisis that led to the separation of parents and children at the border. They have opened collections through the Go Fund Me page to help families pay for their own reunions.

The emotional images of the reunions between parents and children who have been separated on the southern border.

At the Cayuga Center in New York, a social service organization in Harlem, were the children of the Guatemalan Rosayra Pablo-Cruz : Jordi, 15, and Fernando, 5. The mother was released on July 12 in Arizona and was rediscovered the next day with his children. Brendan McDermid / Reuters