Heather White, a partner at the Federal Practice Group, discusses whether or not the Anti-Deficiency Act is being violated by the IRS with Government Executive 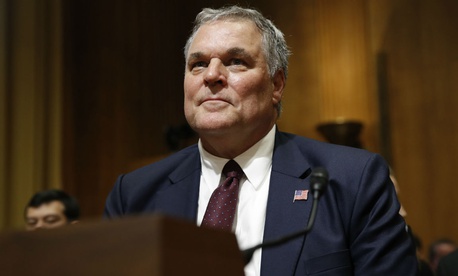 Acting White House Chief of Staff Mick Mulvaney has on several occasions contrasted the Trump administration’s handling of government shutdowns with what he characterizes as the Obama approach of “weaponizing” the lapses in services to make the pain more visible.

On Monday, that line was repeated by Russell Vought, Mulvaney’s replacement as White House budget director, as he told reporters that “tax refunds will go out.  They will not be non-excepted activities.  That’s something that we will be sending out guidance on that we’re fixing from past administrations.”

An unnamed senior administration official had said earlier that no decision on the refund schedule would be made until Wednesday or Thursday. But on Monday night, Internal Revenue Commissioner Chuck Rettig issued a statement saying filing season will begin on Jan. 28, 2019 (lasting through April 15), and that the IRS will provide refunds to taxpayers as scheduled. Software companies and tax professionals will be accepting and preparing tax returns before Jan. 28 and then will submit the returns when the IRS systems open later this month, Rettig added.

“We are committed to ensuring that taxpayers receive their refunds notwithstanding the government shutdown,” he said. “I appreciate the hard work of the employees and their commitment to the taxpayers during this period.”

The decision to recall furloughed workers to process—without being paid—early tax returns and to send out refund checks is being questioned for both its legality and practicality.

Rettig said Congress directed the payment of all tax refunds through a permanent, indefinite appropriation in U.S. Code Title 31 Sec. 1324, adding that “the IRS has consistently been of the view that it has authority to pay refunds despite a lapse in annual appropriations. Although in 2011 the Office of Management and Budget [under President Obama] directed the IRS not to pay refunds during a lapse, OMB has reviewed the relevant law at Treasury’s request and concluded that IRS may pay tax refunds during a lapse.”

The Obama-era opinion asserting that the IRS could not process refunds during a shutdown came from the IRS Chief Counsel, the Associated Press reported.

Rettig promised additional details on the recall of “a significant portion” of his agency’s 52,000 furloughed workers in an updated contingency plan in the “coming days.”

Newly installed House Majority Leader Steny Hoyer, D-Md., on Tuesday also challenged the IRS refund plan. “The president is now going to order them to do what we think is illegal to do because he wants to act like a dictator,” Hoyer said.

John Mahoney, a Washington, D.C.-based federal employment law attorney, told Government Executive he is very concerned that the IRS will violate the Anti-Deficiency Act if it calls in furloughed staff to process tax refunds.  Under the ADA, only essential federal government employees are allowed to work without congressional appropriations in place to pay those employees, he said. “The ADA prohibits the government from being involved in any contract for the future payment of money in excess of currently available congressional appropriations.” In another section of Code Title 31, Section 1342, the law “also prohibits the government from securing voluntary services,” Mahoney said. “The bottom line is that federal government employees should no longer be used as pawns in the president’s scheme to get his wall [along the Southern border].”

Heather White, a partner in the Federal Practice Group, agreed. “At face value, it would appear to be a violation because the designation of whether a federal employee is subject to furlough is supposed to be made ahead of time,” she told Government Executive on Tuesday. ”It does appear that the administration is sort of improvising, to avoid a P.R. disaster as it lurches along. They don’t want various members of the public to be angry with them. They’re willing to throw federal employees under the bus to avoid angering taxpayers.”

The only silver lining for the recalled employees, she said, is that if they’re required to work, they will eventually get paid, whereas if they’re still furloughed, “That is up in the air.” Overall, the situation is “massively burdensome” for employees as they grapple with planning such concerns as child care.

Former Internal Revenue Commissioner Lawrence Gibbs, who ran the agency from 1986-1989, said the current situation reminds him of the fiasco that unfolded in 1985 when the IRS implemented software and hardware changes that did not work, delaying return processing and refunds to up to 80 million taxpayers.  It took years for the agency’s reputation to recover, he said.

“The IRS was clearly at fault,” said Gibbs, now senior counsel to Miller and Chevalier. “But unlike 1985, if tax returns cannot be timely processed and refunds timely paid this year, fault is likely to be [placed] on the politicians in both parties because of their political failure to timely resolve the present government shutdown.”

Marcus Owens, who led the IRS’s Exempt Organizations Division for 10 years, said his own experience with a few furloughs was “nothing like this, where people are first identified as non-essential, and then that classification is reversed, in a sense,” he said. Employees exempt from furloughs are supposed to be those prioritizing public safety and protecting government assets, he noted. “I don’t see how distribution of refund checks falls into that category. Reclassifying people based on jobs not directly related to public safety or assets to spend money is probably more than Congress considered.”

Also complicating the plan, added Owens, now a Washington partner in the law form of Loeb & Loeb, is that that W-2 forms don’t go out to taxpayers and the agency until the end of January. “That makes probably four to eight weeks before they is any filing activity, which makes it difficult to forecast how many people will be needed for the intake process, the documentation and receipt of returns, validation and then the issuance of checks,” he said.

As for the workers, “I don’t know how you motivate people who aren’t being paid,” he said.

Meanwhile, the shutdown continues to hamper IRS progress on broader projects. The furloughed employees of the Exempt Organizations division, according to those who spoke to newsletter editor Paul Streckfus, said, “processing times of exemption applications, which had been trending upwards, will only get worse if there is an extended shutdown,” one tax practitioner said. “Hiring new IRS employees was and is needed, but training will now be slowed down, as will progress on new and revised forms and instructions. The same for examinations and guidance. The shutdown comes at a time when some momentum had been developing for progress in the administration of [tax-exempt organizations] at the IRS.”

To speak with a trusted security clearance lawyer DC believes in, call The Federal Practice Group to schedule your consultation.