An Arms Dealer, an Ex-N.F.L. Player and Huge Federal Contracts for Medical Gowns

The Trump administration awarded hundreds of millions of dollars’ worth of urgent work to small companies with scant experience. 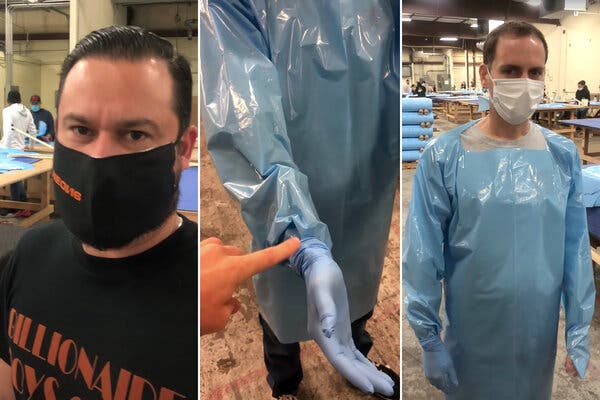 A sample of a gown made for the federal government, as seen in a YouTube video posted by a former N.F.L. player. Credit: Bront Bird

The Defense Department distributed more than $1 billion in federal contracts last month to companies for disposable medical gowns to protect those on the front lines of the coronavirus pandemic.

More than 100 large and midsize companies, many with track records of successfully completing federal procurement contracts, bid for the work. But the majority of the awards ultimately went to a handful of unexpected and inexperienced companies that now find themselves on the hook to produce hundreds of millions of gowns in a matter of months.

One deal, for $323 million, went to JL Kaya, whose only prior federal contracting work was a $7,296 project to make gauze.

A batch of contracts worth $194 million went to Health Supply US, a company founded this year by a former Trump administration official.

And an $88 million contract for gowns went to Maddox Defense, which says it has done government subcontracting work but has never managed a major contract of its own.

Two of those companies have been working with a retired National Football League player and, in one case, a former arms dealer who was barred from government contracting and was the inspiration for the film “War Dogs.”

The contracts for the disposable gowns were announced last month by the Defense Logistics Agency, a Pentagon division that is working on behalf of the Department of Health and Human Services to replenish the government’s stockpile of protective gear and other emergency supplies. The contracts — awarded to a handful of companies, almost all of them small businesses — require the companies to deliver as many as 260 million gowns by early next year.

The contracts went to the companies that offered to produce gowns at the lowest price. Jordan Gillis, the assistant secretary of defense for sustainment, said in a statement that in awarding the contracts, the Defense Department had considered the “financial capability, production capability, past performance and verified references” of bidders.

Mr. Gillis said bidders had “provided sourcing locations and production facility information to demonstrate their ability to comply with” the contract requirements. Since the contracts were awarded, he added, the Defense Department has met with the companies and “implemented robust contract oversight measures,” including visiting production facilities.

But the administration’s selection of inexperienced companies for a crucial job has raised questions across Washington.

At a Capitol Hill hearing last week, two senators expressed concerns that the contracts went to unqualified companies. In phone calls and letters, trade groups for major garment manufacturers have lodged complaints with the Defense Logistics Agency. And at least one company filed a complaint about the gowns contracts with the Government Accountability Office, which investigates federal spending.

“These are large and urgent contracts,” said Charles Tiefer, a former member of the federal Commission on Wartime Contracting in Iraq and Afghanistan and a professor at the University of Baltimore School of Law. “You would expect them to be buying from major contractors they had gone to before, not from unknown contractors, not from unknown entities.”

The federal government’s effort to procure personal protective equipment during the pandemic has been deeply troubled. This spring, a task force led by President Trump’s son-in-law and adviser, Jared Kushner, struggled to obtain masks as health care workers reused respirators and nurses wore garbage bags when they ran out of gowns. Mr. Kushner’s team favored leads about available equipment that came from Mr. Trump’s political allies and personal acquaintances, The New York Times has reported. 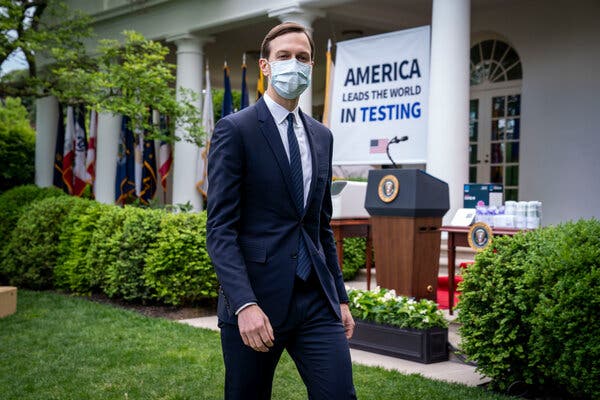 Many states and hospitals were left to fend for themselves. They have had to sort through a sea of scammers that have sent prices soaring. In one instance, New York State awarded an $86 million contract for ventilators to a man who had never sold one before. The deal quickly unraveled.

JL Kaya won the largest award for disposable medical gowns: up to 85 million in the next several months. The company is run by Jose Lagardera, who on LinkedIn said his company’s founding philosophy was to “deliver quality, innovation and service in all of our dealings with our customers, and suppliers.” While the company has done federal subcontracting work before, its only previous contract with the U.S. government was in 2016, when it won a small deal to provide surgical gauze to the Army, according to public records.

It is not clear how JL Kaya plans to quickly produce tens of millions of medical-grade gowns. The company did not reply to numerous requests for comment. The email address on its website did not work.

Mr. Lagardera has teamed up with Bront Bird, who was a linebacker for the San Diego Chargers from 2011 through 2013 and is now a businessman. Mr. Bird posted a YouTube video on Sept. 25 in which he and Mr. Lagardera are in what appears to be a factory where workers are making gowns. Mr. Bird describes himself as an “agent and technical adviser” to JL Kaya. Mr. Lagardera appears in the background but does not speak.

With the camera on a man modeling a shiny blue gown, Mr. Bird said in the video that he was seeking approval to modify the design of the JL Kaya gowns to include thumb straps, among other features.

Mr. Lagardera and Mr. Bird did not reply to multiple requests for comment. 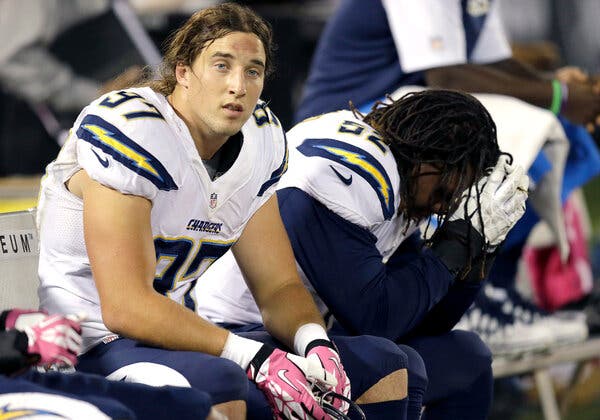 Bront Bird was a San Diego Chargers linebacker from 2011 to 2013, and has become a businessman.Credit: Ben Margot/Associated Press

Since leaving football, Mr. Bird has pursued a variety of careers. He tried to win government work to rebuild the Puerto Rican electrical grid after Hurricane Maria in 2017 when he was chief executive of Foreman Electric, a services company in Mr. Bird’s hometown, Odessa, Texas. He later founded Karla Mae Capital, whose website says it provides companies with financing.

In recent months, Mr. Bird has turned his attention to the expanding market for personal protective gear. He has been working with Efraim Diveroli, the arms dealer portrayed by Jonah Hill in “War Dogs,” who is co-owner of a company called Medlink.

JL Kaya subcontracted some work on the federal award to Medlink, according to the Defense Department and Mr. Diveroli’s lawyer.

Mr. Diveroli is not supposed to be working on projects for the U.S. government. In 2009, he pleaded guilty to selling prohibited Chinese ammunition to the Pentagon and was later sentenced to four years in prison. He was barred from federal contracting, according to a March 2011 debarment order.

Mr. Diveroli declined an interview request through his lawyer, Eric Montalvo. Mr. Montalvo said the ban on his client’s involvement with federal contracts included an exemption that permitted him to work on commercially available products.

A spokesman for the Defense Department, Charles L. Prichard, said the Defense Logistics Agency had not been aware of Mr. Diveroli’s involvement with JL Kaya when it awarded the company a $323 million contract. After receiving an inquiry from The Times, the agency contacted JL Kaya, which disclosed the subcontract with Medlink.

Mr. Prichard said Medlink had “assisted JL Kaya with locating and vetting locations for production,” but had “no role” in making the gowns. “JL Kaya has since disassociated itself from Medlink,” Mr. Prichard said.

A Medlink official referred The Times to Mr. Montalvo, who confirmed that Mr. Diveroli had stopped working with JL Kaya.

Experts on the garment industry said small, untested companies like JL Kaya would be hard pressed to quickly fulfill federal contracts for tens of millions of gowns.

“Given the volume of the awards, this is going to take thousands of workers to fulfill,” said Kimberly Glas, president of the National Council of Textile Organizations. The group represents some of the nation’s largest textile makers, including some that applied for but did not receive the federal contracts.

Some lawmakers are worried about the ability of companies like JL Kaya to fulfill the government’s orders.

“It’s my understanding that some of those contracts have been to companies that have very little experience producing that kind of equipment, that the standards have not always been up to par and it’s created some real challenges,” Senator Jeanne Shaheen, Democrat of New Hampshire, said during a congressional hearing last week.

Ellen Lord, the under secretary of defense for acquisition and sustainment, said during the hearing that the Defense Logistics Agency’s “very stringent criteria were met and adhered to” in awarding the contracts.

On Sept. 18, six trade associations representing American manufacturing companies wrote to the Defense Department expressing “serious concerns in relation to certain contract awardees for reusable and disposable gown procurement.” The letter said it was unclear whether the companies that won contracts could meet the government deadline and “have the technical proficiency to provide the quality of products necessary to protect health care workers.”

Among the other companies that won contracts to make gowns was Health Supply US. It was founded this year by Chris Garcia, who briefly served in the Trump administration as deputy director of the Minority Business Development Agency and was appointed to a White House advisory council in July. The company won several awards to make disposable gowns, together worth as much as $194 million.

Health Supply US plans to manufacture its gowns at several locations, including a former Brooks Brothers shirt factory in North Carolina. The company has also turned to another firm, Maddox Defense, to make as many as 11 million gowns on its behalf.

In addition to doing work for Health Supply US, Maddox Defense won a federal contract of its own worth as much as $88 million. It has set up production in Houston, where it is producing an average of 55,000 gowns per day, according to the company’s chief executive, Jason Maddox. He said the company had already produced millions of gowns for governments and hospitals.

Mr. Maddox said Mr. Bird had been working with his company as a technical adviser on the gowns. He said that Maddox Defense would be able to fulfill the federal contract and that the trade groups were simply “sore losers.”

“They’re alway going to protest,” Mr. Maddox said of his competitors. “They’re always going to try to dig up some dirt that’s just not true.”