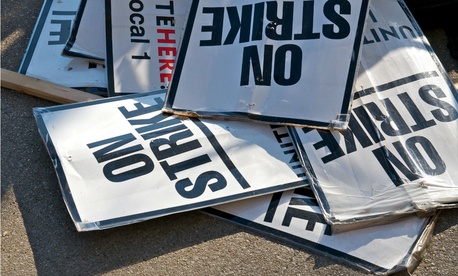 Most famously, almost 40 years ago in 1981, about 13,000 air-traffic controllers went on strike after negotiations over pay and schedules broke down between the Professional Air Traffic Controllers Organization and the Federal Aviation Administration. President Reagan declared the strike a “peril to national safety” and ordered the air-traffic controllers back to work. In the end, President Reagan fired 11,000 controllers and barred them from ever working for the federal government again. Almost 40 years later, most federal employees are still familiar with how that strike played out, which is one reason Border Patrol Agents, Customs and Border Protection Officers, Secret Service Agents, TSA Officers, and others reported for duty, many working grueling overtime shifts, without pay.

The U.S. Merit Systems Protection Board, which adjudicated the appeals of several air-traffic controllers who were fired by Reagan, held that if an employee is charged with striking, it is the employee’s voluntary withholding of services in concert with others, not their actual participation on a picket line which is the basis of the charge of striking. In other words, a federal employee can be fired by striking from their living room. The U.S. Court of Appeals for the Federal Circuit upheld this premise in a separate case.

In another decision, the MSPB held that participation in a strike justifies removal regardless of the duration of the strike. Particularly relevant today, the MSPB explained that the validity of the grievance does not justify strike participation. The Federal Circuit has also rejected arguments that removal of the strikers actually disputed and injured the public more than the strike itself, finding that judgment was “solely a policy choice reserved to the executive branch.”

In short, there are good reasons why, in addition to dedication to country, these civil servants “excepted” from the furlough and required to work without pay continue working. Given that many unpaid workers include air-traffic controllers, federal law enforcement officers, and Homeland Security Department employees, shutdowns may in fact create a safety risk to the American public. We can only ask these civil servants to carry so much burden.

To discuss your options with a federal employee disciplinary action lawyer DC places its confidence in, call The Federal Practice Group today for a consultation.