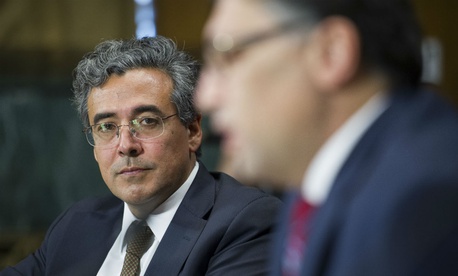 Now Solicitor General Noel Francisco at his nomination hearing in May 2017. Cliff Owen/AP

Days before President Trump shook up the Justice Department with the forced resignation of Attorney General Jeff Sessions, a watchdog group disclosed an ethics waiver granted to the solicitor general that may figure into the unfolding drama over the probe into Russian meddling in the 2016 U.S. elections.

Noel Francisco, confirmed as the Solicitor General in September 2017 after a career as a partner in Jones Day, in April 2018 was granted an unusual waiver signed by recently-departed White House Counsel Don McGahn. It allows Francisco to participate in decisions involving his former firm—which represents the Trump Presidential Campaign being probed by special counsel Robert Mueller.

The heretofore undisclosed waiver for Francisco was obtained by the nonprofit Citizens for Responsibility and Ethics in Washington. Now working for CREW is former Office of Government Ethics Director Walter Shaub, who since resigning from government has been an outspoken critic of Trump administration transparency.

“CREW has uncovered a previously undisclosed ethics waiver that may represent an effort to clear one of the obstacles to Solicitor General Noel Francisco replacing Deputy Attorney General Rod Rosenstein as the official overseeing the Russia investigation,” it said in a Nov. 2 release, when Rosenstein’s job appeared to be on the line. (Trump has since named the Justice Department’s chief of staff Matthew Whitaker as acting attorney general, and Whitaker reportedly will replace Rosenstein in overseeing the Mueller investigation.)

Francisco had been considered a candidate to take over supervising the controversial probe, and he also has been on the short list to become the next attorney general, according to news reports—a position that would put him in charge of the probe.

CREW argued that Francisco should not have received the waiver because he still has financial ties ($500,000 in back pay due) from the firm Jones Day and because, as a member Trump’s presidential “landing team,” he appeared at Justice Department proceedings.

The watchdog also noted that the waiver did not appear on the list of waivers published on the OGE’s website.

CREW also cites Trump’s February 2017 Executive Order 13770 as precluding Francisco’s taking a role in Justice’ handling of the Mueller inquiry. “Francisco signed an ethics pledge in which he promised that, for two years after joining the government, he would not participate in any investigation in which Jones Day represents a client,” CREW wrote in its release. “That promise means he must stay out of the Special Counsel investigation until at least late January 2019.”

The April 2018 waiver relieves him of that obligation without explanation, CREW said.

Also troubling to CREW is the fact that the waiver appears to have been signed by McGahn, also a Jones Day alum, who pledged himself to steer clear of substantive decisions affecting his former firm.

Finally, CREW pointed out that Francisco had received a previous waiver in February 2017 from the Justice ethics office, while he was serving in a temporary position. It suspended the criminal conflict of interest statute and allowed him to participate in a case from which he would have otherwise had to recuse, CREW said. “That waiver is unusual in that it does not state that the Justice Department ever consulted with the Office of Government Ethics before issuing the waiver.”

The Office of Government Ethics told Government Executive it can’t comment on individual cases. The agency did release a program management advisory in April 2017 aimed at improving automatic notice to OGE of new waivers. Its author: Walter Shaub.

Since the inauguration, the Trump administration has staked out new ethics and financial disclosure territory, often clashing with the Office of Government Ethics, which is now led by Trump appointee Emory Rounds III.

Observers have noted that, as solicitor general, Francisco argued in April before the Supreme Court that a president’s powers to fire appointees could be viewed as broad enough in nature to include the DOJ-appointed special counsel Mueller. In a case involving the Securities and Exchange Commission’s internal administrative judges, Francisco argued that the court should clarify the president’s constitutional power to fire all “officers of the United States” who “exercise significant authority” under the law, according to the Los Angeles Times account.

“The Constitution gives the president what the framers saw as the traditional means of ensuring accountability: the power to oversee executive officers through removal,” Francisco wrote in Lucia vs. SEC. “The president is accordingly authorized under our constitutional system to remove all principal officers, as well as all ‘inferior officers’ he has appointed.”

Most of the relevant laws and Justice’s ethics rules, said Bill Cowden, an attorney affiliated with the Federal Practice Group, are aimed at federal employees who leave government, to prevent them from using government information later in “representing a party adverse to the government,” he told Government Executive.

But in Francisco’s situation, coming into government having worked for a firm with interests before the department, no rule prevents him from involvement in cases that affect Jones Day.

“If you look at it from the political side, you could say it doesn’t smell right, because he was at the firm now representing the interests of the president,” Cowden added. “But from a legal perspective” his past work for the firm “doesn’t disqualify him. These attorneys move in the same circles of familiarity, and this happens all the time,” he said. “His best course of action would be to ask the Justice ethics office to advise him. If he gets a legal opinion, he’s not violating any ethics rules.”

To speak with a successful federal employee disciplinary action lawyer DC residents place their trust in, call our practice to schedule a consultation today.