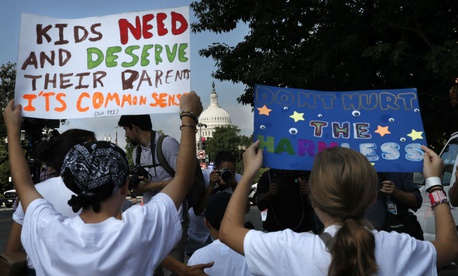 The Trump administration on Thursday met a court-ordered deadline to reunify all eligible immigrant families it had separated at the border, according to new court documents, but more than 700 children remain in government custody because their parents were deemed ineligible to take them back.

Immigration and Customs Enforcement, working with the Health and Human Services Department and others, had until Thursday night to complete the reunifications. The Justice Department provided the update to a federal court in California, where a judge had halted the family separations and issued the timeframe for reunifications. The deadline for reuniting children younger than five passed earlier this month, though the administration struggled to meet it.

The deadline passed as yet another watchdog announced it would audit the fallout from the Trump administration’s “zero tolerance” policy. The Homeland Security Department told lawmakers this week it was “broadly reviewing issues regarding the separation of families, conditions of U.S. Customs and Border Protection facilities where minors are detained, and other issues of congressional interest.” The DHS IG joins its counterpart at HHS, with whom the auditors said they will collaborate, and the Government Accountability Office, both of which had previously announced probes into the policy and subsequent family separations.

More than 400 of the children are still in HHS custody because their parents have been deported. In 120 cases, the government said the parents waived their right to reunification. The American Civil Liberties Union, which brought the lawsuit before the U.S. District Court for the Southern District of California, presented interviews as evidence to the court this week in which such parents said they were misled or unsure of what they were signing.

In other cases, parents were ineligible because the parent’s background check raised a red flag or the parent had previously been released into the United States. In nearly 100 cases, the government was still reviewing the parents’ locations.

ACLU attorneys said they had no information on where the reunifications that have already occurred had taken place, which the organization requested to both verify the reunifications had actually happened and to arrange for legal counsel and other services. They also asked for detailed information on the parents the administration deemed ineligible for reunification, including those removed from the country, in order to help them reconnect with their children as quickly as possible.

Attorneys and activists at detention centers and government facilities where separated immigrants were being held and reunifications were taking place have described a “chaotic” process, with employees admitting they were operating without guidance from their agencies. Trump administration officials said last week, when HHS and ICE had reunified fewer than one in five separated children, that they expected there were “going to be some issues” in meeting the court’s deadline. Dana Sabraw, the federal judge overseeing the lawsuit, however, has praised the Trump administration for its timeliness and efficacy.

Astrid Lockwood, a senior partner at the Federal Practice Group who represents several parents who were separated from their children, said there was a “spike in how crazy things got” before the reunifications took place. Her clients were transferred from Colorado to Texas without her knowledge and ICE officials did not help her locate them.

“They wouldn’t let me know where my clients were,” Lockwood said.

The reunifications took place in family detention centers. Lockwood worked with Casa de Paz, a nonprofit based in Aurora, Colo., to help arrange transportation out of those centers once the reunified families were released. She said it was unclear how the reunification process itself transpired, but there was significant chaos as families were released. Lockwood has spoken to the mothers since then, however, and received photographs.

“It was like looking at a completely different woman than the woman that I met at the detention center,” Lockwood said of her clients. Now, she added, she is “dealing with the aftermath,” including trying to find pro bono child psychologists. “Every single one of [the mothers] has said the kid is not OK. There is trauma there.”

The families will now seek a change of venue to their new locations as they begin what Lockwood estimated would be a three-to-four year fight in their asylum cases.

Meanwhile, the ACLU and the Trump administration were scheduled to meet again on Friday to provide a status update and for Sabraw to rule on ACLU’s additional requests.