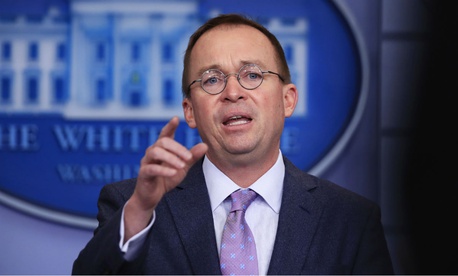 Acting CFPB Director Mick Mulvaney could stay on in the post longer than the Vacancies Act limit if there is a nominee for the permanent job. Manuel Balce Ceneta / AP

Since his first trip from the Old Executive Office Building across the street, White House budget Director Mick Mulvaney has roiled consumer groups with his cross-grain policy changes as acting director of the Consumer Financial Protection Bureau.

Now, under the 1998 Federal Vacancies Reform Act, the long-time critic of the agency he temporarily runs is set to leave by June 22, which will be 210 days since his appointment by President Trump last November.

In a session with national reporters last Tuesday, Mulvaney confirmed that Trump next week will likely nominate a permanent director among candidates being vetted by Treasury Secretary Steven Mnuchin, economic advisers Larry Kudlow and Kevin Hasset. He said he expects to be around CFPB until the end of 2018 while the Senate processes Trump’s nominee, and then to help that successor get oriented. But running the Office of Management and Budget, he told The New York Times, is his dream job.

» Get the best federal news and ideas delivered right to your inbox. Sign up here.

Asked for comment, a CFPB spokesman told Government Executive, “Acting Director Mulvaney has not been involved in the process of selecting a permanent director. However, he has been in touch with the White House regarding timing, and expects a nominee to be named before the June 22nd deadline.”

The Vacancies Act, however, makes the situation more complicated. “Once the nomination is made, Mulvaney can stay in position as acting until the nomination is either approved or rejected,” said federal employment attorney John Mahoney. “If the Senate rejects the nomination, the president can nominate someone else, and Mulvaney could stay until the second one is confirmed.”

The 210-day clock would “start over,” agreed Debra D’Agostino, a founding partner of the Federal Practice Group. “There’s no telling how long Mulvaney would keep going if the Senate rejects the nominee or the candidate backs out—it could stretch into next year.” This being a mid-term election year and the Republican Senate majority at a slim 51 seats, confirmation of any Trump nominee is not a sure thing.

Trump’s apparent respect for the Vacancies Act, D’Agostino added, assumes a premise that Mulvaney’s appointment was legitimate in the first place. It was challenged last fall by deputy director Leandra English, who lost a round in district court but in April filed an appeal.  (Though she’s still in office, English’s bio is not up on the CFPB website, which says it is “coming soon.”)

Her argument, backed by senators such as Elizabeth Warren, D-Mass., who conceived of the bureau, “has two prongs,” D’Agostino said. The 2010 Dodd-Frank Financial Reform Act “specifically states that the deputy director becomes acting director if the director becomes unavailable, and it specifically says that OMB should not have oversight of the bureau,” she said. But Trump argued that the Vacancies Act allowed Mulvaney to serve for 210 days until Trump appoints someone new. “The court at the end of the day felt it was a separation of powers issue, and didn’t want to tramp on the president’s rights,” she added.

A decision by the U.S. Court of Appeals for the District of Columbia Circuit, which heard oral arguments in April, “is likely to take a few more months,” D’Agostino said. “The rub is that it seems the court was most persuaded by the argument that OMB should not have any oversight over CFPB per the statute creating CFPB, so if Ms. English wins on these grounds, she may serve as acting director only for a few hours or days until Trump names a person other than Mr. Mulvaney to serve as acting director.”

Candidates being considered, according to news reports, include J. Mark McWatters, board chair of the National Credit Union Administration, and a financial industry regulator. Also mentioned is Todd Zywicki, a law professor at George Mason University’s Mercatus Center, and retiring Rep. Darrell Issa, R-Calif. Issa told Government Executive this spring that he was looking for a job in the administration, and he was rumored to have his eye on the deputy secretary of Commerce position, though that nomination on June 4 went to investment adviser Karen Dunn Kelley, who is currently undersecretary of Commerce for economic affairs.

Mulvaney, meanwhile, is continuing his agenda with cutbacks on enforcement and firing of consumer advisory board members.

In his Tuesday press session, he defended his decision to change the bureau’s name to the Bureau of Consumer Financial Protection, to literally adhere to the Dodd-Frank language. He said rearranging the letters required little cost, and that existing CFPB stationery will be used until supply runs out.

More substantively, he will ask the Federal Reserve Board to cut the bureau’s fiscal 2018 funding by about $200 million. He has asked staff to identify 20 percent cuts in spending, mostly in travel, rather than in reductions in employees.